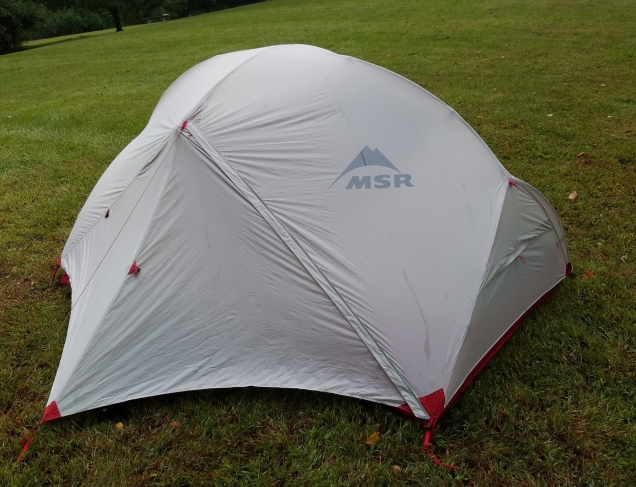 The hubby and I bought a tent at the last REI garage sale, which meant that of course we had to try it out somewhere other than our living room. It’s hard to tell how a tent holds up in the wind when there are four nice walls surrounding it, after all – and since we got the tent for backpacking/adventuring, knowing how it performs ahead of a big trip is a must.

Even if that means purposely going out and camping in the rain.

We picked Saturday night for our test run and decided we’d stick with it even when the sunny-and-seventies weather of the initial plan turned into rainy-with-a-high-of-46. After all, we reasoned, better to find any leaks now when we’d be less than half an hour from home. It would be a fairly simple matter to throw everything in the Subaru, admit defeat, and spend the rest of the night in our bed. I’d also picked up a sleeping bag liner at the REI garage sale and was interested to see if it would make my sleeping bag any warmer. But I digress.

Our tent is the MSR Hubba Hubba NX, which has 4.6/5 stars on the REI website (link here) but was returned because it “didn’t perform as expected” according to the tag at the garage sale. (This might be a good time to mention that this post is not sponsored by REI, or anyone else for that matter.) Having experienced several situations where an item was returned more due to user error or unrealistic expectations than any actual defect, the hubby and I were hopeful that would be the case with the tent. 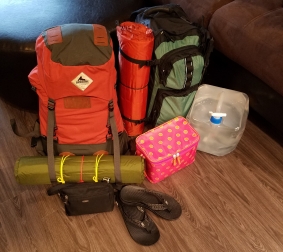 Our previous tent was a Kelty Teton 4, and the first things we noticed were differences between the tents. The Hubba Hubba is considerably lighter at only 3 lb 7 oz (compared to 7 lb 8 oz) and packs MUCH easier. When we’ve used our backpacks in the past, the Teton took up half of A’s pack, if not more.  This time, we were able to do a test run of our packing list and backpacks as well, since the tent was small and light enough that everything we needed could feasibly fit in the backpacks.  We did end up bringing several “extras” (marshmallows, anyone?) but broke those out into a separate cooler.  In the event of a real backpacking trip, anything in the cooler would stay behind and we now know our bags can take everything we need for an overnight trip.  As it was, loading up the car to head out was still a breeze.

It was misting when we got to the campsite, with actual rain threatening.  Luckily, the tent was easy to put up.  One of the other tents we looked at recently had poles that need to go on a specific end, even though they look very similar.  It confused us on a sunny morning when we had all the time in the world.  In the rain, hurrying to get the rain fly on, I was very glad for the Hubba Hubba’s symmetrical design and overall ease of setup.  It uses a single main pole with V’s on each end, and a short pole in the center to hold out the top of the tent.  The poles are attached with clips, so they do not have to be slid through sleeves.  We had the tent set up in no time, and secured the rain fly even faster, thanks to color-coded straps that make it easy to align. 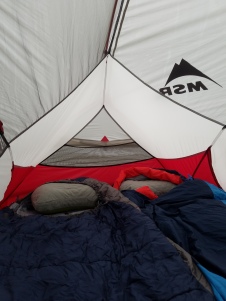 We dumped our bags under the vestibules – one on each side, so the bags both fit, another perk – and A started what would turn into a two-and-a-half hour ordeal of starting a fire with damp wood while I set up the interior of the tent.  The Hubba Hubba is the same width for its entire length, which made it easy to fit both of our sleeping pads, although there was no extra room on the sides.  Our pads are both 21″ wide – deluxe when they were bought in the late 80’s, but nothing fancy now – and I was glad they weren’t wider.  We did have a bit of extra space lengthwise where we ended up storing our headlamps and water bottles for easy access overnight.

With setup done quickly, we had plenty of time to make supper (Ramen bombs are amazing on a cold, wet day – I’ll make another post on those later), scavenge the surrounding woods for some partially dry wood, and roast marshmallows when the fire caught at long last.  It was still misting when we climbed into our sleeping bags to give the tent its actual test.

I had wondered if I would miss the additional elbow room in our 4-person tent, but if anything I liked the smaller setup more.  With the sleeping pads pushed together, there was nowhere for them to slide.  The smaller space also stayed remarkably warmer through the night – warm enough that I tossed aside the extra blanket I usually use with my sleeping bag on chilly nights.  For someone who is perpetually cold, being too warm on a 40 degree night was an exciting novelty, not to mention a very good sign for future backpacking trips.  If I don’t need to bring an extra blanket, no matter how much it packs down, I have room for something that would have been sacrificed before.

Pack-up the next morning was easy as well.  The Hubba Hubba has a bag design I haven’t seen before.  It opens lengthwise instead of at the top, meaning the tent and rain cover can be folded up and laid in the bag.  The pole bag is then placed in the middle, and a drawstring tightens the bag down before two straps latch over the opening.  Playing around with this feature beforehand, I discovered that the Hubba Hubba can be compressed much more than the Kelty could without the use of a different stuff sack.  It also alleviated one of my pet peeves – the tent ballooning with stuffed air when being put away.  Of course, we had to unpack everything when we got home and the living room turned into Drying Station Central; luckily the cat got a kick out of this.

While a campground in Iowa may not push the Hubba Hubba to its limits, I’m happy with how it performed and excited to use it on more adventures.  Maybe next time we’ll even get some sunshine!

I’m in the early stages of planning a trip to Moab, and amidst looking up the best rides and climbs and campsites, I’ve started thinking about my last trip to Utah.  I went with a group through my college’s Outdoor Recreation program, and while my husband went on the Moab trip, I picked Grand Staircase-Escalante.

We spent most of the trip doing day hikes, but there was one overnight backpacking trip on the itinerary, and I looked forward to it all week.  So, of course, I got my period when we were about 45 minutes from the van – where I had left all of my feminine products.  The most frustrating part was that I hadn’t forgotten my period.  I had a full supply of items in my larger bag that we were leaving steadily behind us.  No, what really annoyed me was that my period was a full week early.

One of the female trip leaders explained this wasn’t uncommon, given that I had been considerably more active than usual in the last several days.  Another trip participant offered to share her tampons, since her period was almost over.  The rest of the women commiserated, and I continued on thoroughly embarrassed but wiser.  Problem solved.

I should mention that for a good portion of my life I’ve had an unreasonable but persistent fear of mountain lions.  I have a theory it started thanks to the Laura Ingalls Wilder story and accompanying image of Grandpa and the Panther.  Whatever the reason, the fear was still persistent that week in the Utah desert – manageable most of the time, but almost debilitating when circumstances aligned correctly.

We camped that night in a creek valley between two cliffs.  A small stream bordered our campsite on one side, providing both a water source and a picturesque feel, and I fell asleep listening to it gurgling over rocks on its way to the larger stream just east of our site.

When I awoke several hours later to a feeling I usually think of as “I needed a new tampon a freaking hour ago” the sound of the creek was gone.  Our lovely valley was now a wind tunnel, and as I crawled out from between the other two girls in the tent to deal with the situation, it shook the trees and tents relentlessly, creating enough of a racket that I couldn’t hear the stream until I was kneeling directly beside it to wash up.

Maybe it was the fact that I was crouched down and by necessity focused on my hands rather than the surroundings.  Maybe the wind lifting the hair off my neck as I bent over reminded me that I was perfectly positioned to be attacked from the trees above.  Maybe it was just the thought that blood attracts predators and I’d come out here thanks to an abundance of the damn liquid.  Whatever the reason, I found myself frozen with my hands in the icy water of the stream, cursing the trick of fate that had made me a girl and therefore led directly to his moment.  Mountain lions lurked in every corner of my mind, projecting themselves onto the surrounding landscape and drawing steadily closer.

They say you don’t know what you can do until you don’t have a choice, and as I sat frozen by the stream in the blustery darkness, I realized there were essentially two options in front of me.  I could remain terrified and useless for the five or so hours that remained of the night, waiting for the imaginary mountain lions to descend, or I could wring out my underwear, wash my hands, and go back to bed.  Put like that, the choice was so simple it seemed ludicrous.

By dawn, the wind had died down and the campsite, bathed in the early morning light, reverted back to picturesque and welcoming.  We made M&M pancakes for breakfast, then packed up and headed on to the next adventure, which involved hiking through a thigh-high stream.  Yesterday, the idea had seemed daunting, even overwhelming.  On the heels of my midnight revelation, it was easy to break down into two simple paths: go forward with the rest of the group, or go back alone.  And I wasn’t about to be left behind.