I’ve completed the second and third rides on my TrainerRoad training plan.

The good news: I got my own trainer and the hubby and I can ride side-by-side now!

The bad news: I spend the first half of my hour ride on Thursday night seriously pissed off at the setup.

In all honestly, I doubt I did the calibration correctly. Since the hubby started using both the trainer and TrainerRoad before me, I had him help with setup and I was able to get by with less-than-stellar prep. It’s one of those situations I’ve been noticing recently, where I have taught myself to rely on him and it ends up biting me in the butt. Oops.

I also didn’t have a cadence sensor for the ride on Thursday. I’d ordered one, since biking at the same time makes it hard to share the one we already have, but it still hadn’t arrived. I’m pretty sure these two items were the cause of my main frustration, and while they’re both very fixable, it didn’t help my mood for Thursday.

So, what was the problem? Remember my comment in my previous post that I was spinning at about half the recommended cadence on my first ride? Having noticed the deficiency, I didn’t like the idea of returning to a bad habit. However, in order to bring my power down to the correct level when I was recovering between intervals, I had to slow my cadence considerably. Even shifting to a lower gear didn’t help. Take a look at the graph below. The blue is the target power output and the yellow line is what I actually achieved. Not exactly on-target. 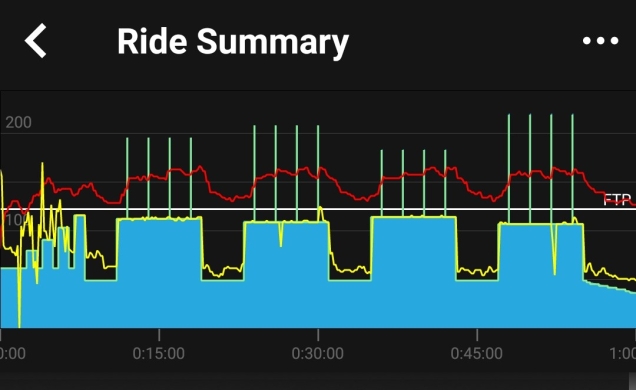 After the disaster of a warm-up and the first recovery period, I gritted my teeth and decided I’d just have to deal with the slow cadence. Unfortunately, that didn’t work well either. Every time I lowered the cadence enough to match the target power, TrainerRoad would pause the workout with an infuriating message: “pedal to resume.”

Yes, thank you for the note. That’s a great idea. Oh, wait, I AM PEDALING. 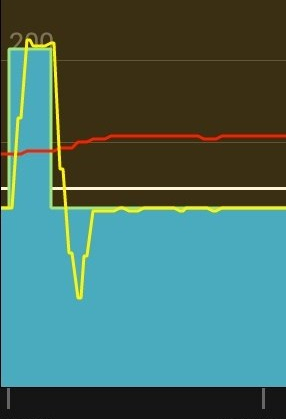 The same problem occurred after the five-second sprints. Since I almost doubled my power output during these intervals, the subsequent spin-down left the back wheel and trainer spinning at high RPMs. Without the cadence sensor, TrainerRoad had no way to tell if I actually was pedaling, or if I had simply decided to “coast.” Cue yet another “workout paused, pedal to resume” message.

Luckily this problem only lasted for a few seconds after each interval, but it still frustrated me enough to take any enjoyment out of the workout. I finished the hour feeling more relieved to be done than accomplished.

Amazon reported that my cadence sensor wouldn’t be here until after my Saturday ride, so I was pleasantly surprised to find the package waiting for me after work on Friday. I calibrated the trainer on the TrainerRoad and the Wahoo apps, and spent some time confirming that all of my devices were labeled “Jen’s” in the TrainerRoad app. The last thing I wanted was to end up using the data from the hubby’s heart rate monitor or cadence sensor!

With all of the technology set up, I still had to face one more big challenge: the third ride every week on this training plan is an hour and a half – which is not only the longest I’d ever been on a trainer, but longer than my average trainer session by, oh, about an hour. Yikes. 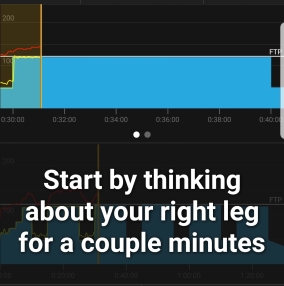 Thanks to the improved set-up, Saturday’s experience was similar to my first ride, and I got through a lot of it by focusing on the tips and exercises in the app.  Still, the ride was composed of five ten-minute intervals just below my FTP, and by the last one I really didn’t give a damn about engaging extra muscle groups by kicking through the top-stroke.  I just wanted to collapse on the couch with the cat, who clearly thought 90 minutes was the perfect amount of time for a nap.

Finally, blissfully, it was done.  It had been a week of milestones: first official training plan, longest trainer ride, first ride on my own trainer, and the first time setting up my own equipment totally on my own. There had been hard parts, of the frustrating, painful, and exhausting categories, but as of this moment, all of those have only made me want to push harder, not give up.

We’ll see what next week brings. Right now, though, I’m wondering if I might be tougher than I think.