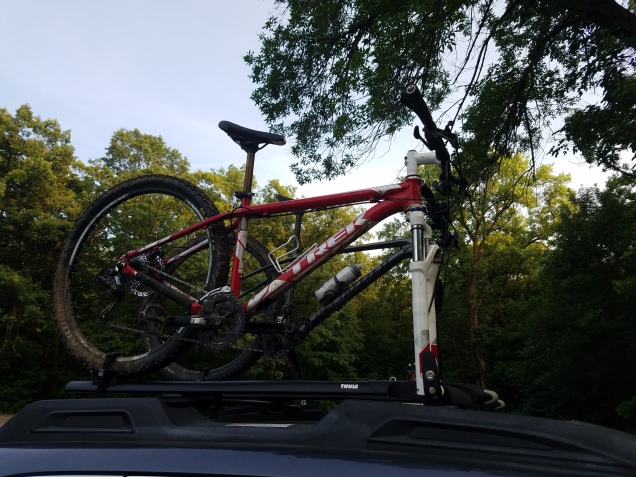 It’s amazing the difference that five years can make – and I don’t mean the improvements that come from five years of constant practice.  Five years ago, my husband (A) discovered that mountain biking existed in Iowa and I became his (very reluctant) biking partner by default.  To my embarrassment, I don’t think I made it through a single ride in 2012 without either screaming, cussing, getting mad, or crying, and at it was usually a combination of those. Would you believe that A wasn’t very fond of riding with me? Surprising, right? And just as “surprising” – mountain biking was about as low on my fun scale as going to the dentist.

So, when A quit biking in college, I wasn’t exactly heartbroken, and when he picked it up again this spring I approached the entire idea with trepidation. I certainly never thought I’d suggest venturing out into 95 degree woods and chasing him up hills for my Friday night activity.

And yes, you guessed it – that’s exactly what I did multiple times this summer. Part of it I considered good training for the two mountain bike races I (voluntarily) signed up for. The other part was just fun.

Part of the difference is obvious, physical changes I can point to and quantify. I’m riding A’s 2012 Trek Cobia now, complete with front suspension, 29″ tires, and grips that I adore. Five years ago, I was on a fully rigid Trek at least as old as I was – and looking back at the photos, I’m pretty sure the frame was too big for me. I’ve ran a half marathon, two 10k’s, and enough 5k’s to lose count; in 2012 I simply didn’t believe I could run farther than a mile. Of course long rides and steep climbs are easier now!

But to attribute my improvement to better gear and stronger legs ignores a great deal of other things that have happened in the interim. College meant that work was either done or it wasn’t, no one cared to hear your excuse. I’ve gone through about 26 interviews, three internships, and now work in a field where you could die by stepping in the wrong place at the wrong time. My company could lose thousands of dollars on a contract if I don’t pay proper attention to details. (I’m still occasionally blown away when I stop to consider how much I could mess up.) In the world where I live now, throwing up my hands and screaming is simply not an option.

As often occurs in life, I rarely have a clear picture of just what has changed or how far I’ve come because the shifts are so gradual.  If I’d kept biking for those five years, I undoubtedly would have improved.  But then I never would have gotten on the bike remembering torture, and instead experienced magic.  And I very much doubt I would have realized that it is not the changes in my body, but those in my mind, that truly made the difference.

I still can’t keep up with the hubby unless he lets me, and I may never be able to.  But the photo above was taken in the exact location where I crashed, screaming, into a ditch on my last ride in 2012 – and this time I was laughing from the exhilaration, going fast enough that A’s camera didn’t quite have time to focus.

It’s been cold and rainy here recently, and my focus is turning towards what I can do indoors through the winter.  But this year, there is no sigh of relief that my reprieve has finally arrived.  No, this time, I’m already getting excited for what next year can bring.